Maria Bamford and Me 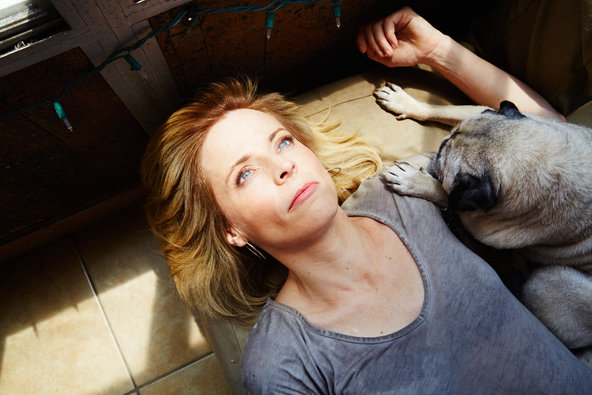 When I moved home at age thirty to live with my mother, I slept in the den because the apartment was so full of boxes, I couldn’t make a pathway between the doorway of my bedroom and the bed. I couldn’t go to sleep without watching Louie, and my memory of that time involves (repeatedly) waking up at around two or three in the morning because we were having an earthquake and my dog, for the life of her, couldn’t figure out which direction to project her barking. Afterward, Netflix wanted to know if I would like to continue watching Louie, which was perhaps the only question that I knew how to answer. I thought I was just looking for a giggle, but by the time Louis C.K. travels to Afghanistan and a duckling wobbles out into a gun-lined gulf between nations, eliciting laughter, I realized that this show wasn’t just loosening the pain in my chest, it was opening a hole there and filling me with the kind of globalized compassion that allows Buddhist monks to grow new neurological pathways. The narcissism of my mid-life shenanigans made this feat—to feel empathy?—all the more impressive. When, two years later, I still found myself “in the process of helping my mother move,” it was Maria Bamford who distracted me from obsessing about nuclear attacks and earthquakes in the middle of the night.

It was love at first YouTube. The premise of The Maria Bamford Show—“After being sighted by a homeless Comedy Central fan in Detroit, where she was selling clock radios on the sidewalk, she retreated to her parents’ home in Minnesota”—was my story, too, albeit with a bit of a twist:

In her 2012 Netflix show, The Special Special Special, a performance recorded in her home, for an audience of only her parents, Maria describes her online dating profile as follows: “I can wear the same outfit for five days or I can crouch down in the shower and make myself real small.” This list of skills was uncannily similar to my own range of abilities at that time. I realized then that making humor of my current state was the only thing that broke through the thick haze of my anxiety and depression that didn’t involve drugs or exercise. Since then, I have also realized that, as much as Claudia Rankine and Haruki Murakami, these comedians were teaching me how to write better, by demonstrating the payoff of weird lyricism and surprise. As much as James Baldwin and Pema Chodron, they were telling me that life would only ever, always be a struggle; that real laughter exists on the other side of that resignation.

The thing that truly zaps me is when Maria gets plain witchy with her rambling. Her response to a DJ who likens her brand of humor to schizophrenia seems like voodoo masquerading as a joke, a koan of absurdity that refutes and one-ups his misdiagnosis: “Hey, coward, if somebody sings out their Batman poetry to a largely hostile Barnes and Noble crowd, or if you crank out a raw unedited skull of a Granny Smith apple, pop that on a Bratz doll torso, upload that to Etsy, price it high, if you think of doing a nude clown opera, you write it, you cast it, you actually fucking do it? That doesn’t show you’re insane. That shows you are hardworking.”

I guess some part of this review is fueled by Cybele’s mention of Joyce Carol Oates’ recent twittered misgivings about stand-up comedy, a judgment that feels like a violation—slander against my gurus and therapists. For the geniuses of either craft, there is simply no difference, to my mind between literature and comedy. In fact, I’ve wondered if the stand-up stage is where some of the best essays are being written.

Aisha Sabatini Sloan is the author of a book. She now lives in Tucson, Arizona, where she is attempting to be a little less Zen. One can overdo these things.

Photo of Maria at the top of this post is by Tierney Gearon.