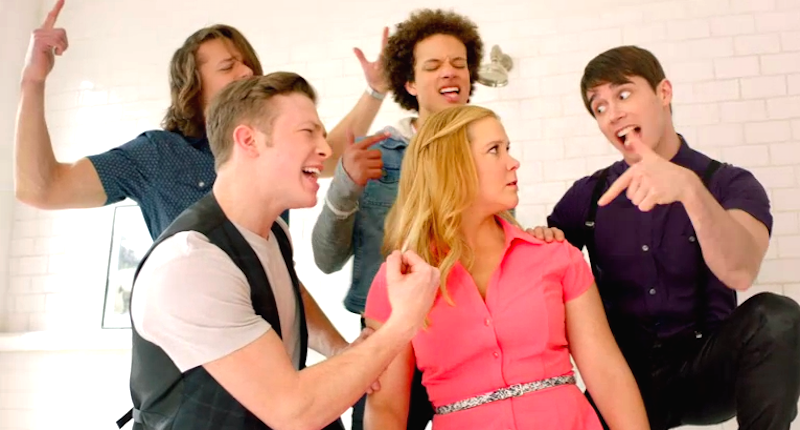 I’ve never seen a full episode of Amy Schumer’s show, I don’t really care for her stand-up, and at the time of the writing of this post, I hadn’t yet seen her movie, Trainwreck. Yet I would declare to anyone I met, “Amy Schumer? OMG I LOOOOOOOVE HEEEEERRR!!!!” (Yes, I talk like that; I am a good time at parties).

What gives? Am I a liar or a poser? Possibly, like, in general. But I’d venture to guess that many (maybe most) of the fans contributing to Amy’s current pop-culture moment have the same relationship with Amy’s comedy as I do.

Amy’s Comedy Central sketch show, Inside Amy Schumer, produces one-to-three-minute skits. Excerpted from the show, certain skits, having achieved viral success, pop up all over my Facebook, Twitter, and favorite websites. Thus, I’ve watched Amy Schumer in the way many of us consume much of our pop culture these days: through clips on YouTube.

I, like an increasing number of Americans, don’t “have television”, and watch my television almost entirely through Internet streaming. I could, if I wanted to, watch full episodes of Inside Amy Schumer via Comedy Central’s dreadful website or, more efficiently, through the streaming service Hulu. But I’m more than happy to be informed by the Internet of the cream-of-the-crop Amy Schumer sketches and watch them in short bursts. And then force my boyfriend to watch them. And then post them to social media. And then interrupt something more important in my everyday life by saying, “Have you seen that Amy Schumer sketch?! You HAVE to watch RIGHT NOW,” and pulling out my phone or computer and pulling up YouTube and saying, “Sorry, it’s just taking a second to load,” and, “God, this ad is so long, hold on just a second, I promise the sketch is funny.”

(Amy Schumer’s internet-accessibility is no thanks to Comedy Central’s own website, which, like most television network websites, sucks. It’s difficult to access full episodes, the website is slow and clunky to navigate, and even short clips are preceded by very, very, slowly loading ads. As usual, Hulu is a better and more efficient way to access a show like Inside Amy Schumer, though you do have to pay a monthly fee and there are short ads. And, of course, YouTube is even better, being free, though you are unlikely to find a full episode. Comedy Central, despite its shitty website, obligingly posts clips of many Amy Schumer sketches to their YouTube channel. Jezebel has reposted so many of these that the grumpy among the commentariat has been complaining that Amy Schumer is played out, not that great, and probably Jezebel is paid by Comedy Central to promote her).

I don’t think Amy Schumer would have achieved the success she has if she’d stuck to stand-up and never ventured a sketch show. As I said, when I tried to watch her stand-up, I was really disappointed. Her comedy relies on battle-of-the-sexes humor; watching her stand-up, I realized that most of her observations aren’t that funny outside of a surreal sketch-comedy format.

My favorite George Saunders wrote, “Humor is what happens when we’re told the truth quicker and more directly than we’re used to.” Amy Schumer’s sketches tell a certain kind of truth more quickly than a comedy set ever can. And, to flip the Saunders quote, her sketches tell a truth in a surreal, convoluted way that amplifies and complicates the sometimes-banal observation at their center.

For instance, there isn’t nothing particularly ground-breaking in pointing out that waiting on hold for the cable company is torturous; what makes the sketch “Calling the Cable Company” breath-catchingly hilarious is how Amy Schumer takes the conceit to surreal extreme after surreal extreme.

Further, the observations at the center of a sketch like “Fight Like a Girl” are banal to the point of reinforcing misogynistic characterizations. The main joke is that women are “smarter and crazier” than men, running circles around them in clever traps to elicit compliments…and hoo boy, don’t irk them when they’re on their period, har har! But the sketch’s execution—a seriously done parody of a fight-training sequence straight out of some nineties movie you definitely watched as a kid—makes the hoary clichés somehow funny.

Don’t get me wrong: Amy Schumer has been lauded for her feminism, and I agree with this assessment. Her famous “A Very Realistic Military Game” takes on rape in the military demonstrates that you can make a rape joke, if you skewer rapists and sexist bureaucracy rather than victims.

But that doesn’t change the fact that much of her comedy reworks the old “men talk like this, and women talk like this” you can hear at any amateur night at a comedy club. The difference is in the awesome sketch execution.

“Men hate shopping lol!” isn’t funny, but “Say Fine to the Shirt” is fucking hilarious because of its spot-on imitation of “Say Yes to the Dress” as well as Justin Long’s over-the-top dude-bro performance. Again, if I went to a comedy set where some comic cracked, “Dudes hate shopping, amirite? Women have ‘Say Yes to the Dress’ – they should make a show for dudes called ‘Say Fine to the Shirt’!” I probably sit stony-faced. But the sketch makes me laugh every time because of its extended commitment to the premise and the great performances.

Similarly, “A Couple Chooses a Movie” is peak “men talk like this, and women talk like this” (men don’t want to admit they like “Pitch Perfect” lol!), but the spot-on skewering of things like horror-porn movies makes it perceptive and relatable.

In fact, I’d argue that Amy Schumer’s success as a feminist is in part because she takes now-standard feminist observations and executes them in a confidently ridiculous fashion. It’s not ground-breaking to point out that roles for women in Hollywood disappear as they age, but “Last Fuckable Day” spins out the premise in a fantastically surreal way, as three actresses ritually celebrate this coming-of-age non-existence. Amy Schumer’s feminism is safe feminism, with what the Guardian charitably described as a “blind spot” about race (the Washington Post has a blunter take).

In brief: I agree very much with most things that Amy Schumer has to say in her sketches, but I don’t find those things very profound or even ground-breaking, and sometimes I even find them boring or problematic. That doesn’t mean her sketches aren’t often very, very funny, however.

I’ve enjoyed her show’s most recent third-season sketches the most, because they take the simple premise and wrap it in a more complex parody. Her early sketches suffer too much from letting one joke dominate. As time as gone on, she and her staff have mastered the art of adding a twist to the end of the sketches, complicating the simple joke, such as in “Search History” (watch all the way through) or “Multiple Personalities” which tags on an extra twist-joke at the end.

Arguably, the show is at their best with parodies. Skewering boy bands and condescending “I-love-you-just-the-way-you-are” songs might seem like easy pickings, but “Girl You Don’t Need Make-Up” is not only a perfect parody, with insight into our culture’s complicated mixed-messages to women about make-up, it’s also a damn catchy song. Are you infuriated about rape culture in high-school football? Check out Amy’s pitch-perfect “Friday Night Lights” parody. Having difficulty explaining why Aaron Sorkin is so patronizing in his writing of female characters? Share “The Foodroom.” These parodies deserve the highest praise of all, which is that they create their own object: you do not need to know any of the source material to find them hilarious.

One day, I’ll watch an Inside Amy Schumer episode all the way through. For now, though, excuse me while I go play “Girl You Don’t Need Make-Up” for the millionth time.

Laura C.J. Owen is a writer and teacher in Tucson, Arizona.

← The Canon Behaving Badly: “Texts from Jane Eyre” by Mallory Ortberg
On Joyce Carol Oates, Stand-Up Comedy, Poetry, and How Each Genre Is a Special Snowflake and We Need Them All →