“The Western canon is full of jerks from beginning to end—just mean awful people who make terrible decisions and ruin everyone else’s lives.” In Texts from Jane Eyre: And Other Conversations with Your Favorite Literary Characters, author Mallory Ortberg, starting from this position, creates imaginary text conversations between prominent figures from Western lit and their (unfortunate) friends and family. It’s simultaneously a love letter to the canon and a hilarious critique of how we discuss and value it.

As she often does in her her pieces for The Toast (where the first of these text conversations appeared), Mallory translates the words and actions of revered literary characters into a contemporary voice and format that renders them human-ish again. Battle-scarred and weary English majors (self included) will respond to this re-humanization with extra delight. Reading Texts feels like someone let fresh air into the classroom—and then shared Starbursts and sugar-free Red Bull from their backpack with you. A surge of energy and glee results.

So much of the fun of Texts from Jane Eyre comes from the voices Mallory gives to characters who were unpleasant to begin with, or whose unpleasant attributes she exaggerates for comedic effect, including Hamlet (spoiled f*cking brat), Daisy Buchanan from The Great Gatsby (major f*cking bitch), and Sherlock Holmes (highly unreliable coke addict).

Mallory’s portraits are moral evaluations that, without fail, find the evaluee to be wanting.  If you’re not a battle-scared and weary English major, you may not be aware that since the emergence of New Criticism in the mid-twentieth century, this has been an unfashionable way to examine literature. New Criticism, according to Wikipedia, was a way of valuing literature that emphasized reading “to discover how a work of literature functioned as a self-contained, self-referential aesthetic object.” To oversimplify somewhat, New Criticism cared about structure and form, not content and context. Reading, Writing, and the Rhetoric of Whiteness by Wendy Ryden and Ian Marshall describes the constraining effects of the New Critical approach as follows:

New Criticism teaches us that the “text” is a self contained entity with an internal unity. Conflict, ambiguity, and resolution all contribute to the meaning of the text which stands alone as its own universe…. The principles of New Criticism do not easily allow for students to engage their own experiences in the interpretive act, and so just as New Criticism was formulated in the 1920s and 30s as a reactionary response against liberal democratic progressive views at the time on the part of its architects and became part of a kind of an intellectual Jim Crow, so too does New Criticism serve as a kind of short circuit between students and their experiences.”

New Criticism loosened its chokehold in English departments decades ago, but institutions change slowly, and our reading as taught in schools is still limited by New Criticism. Probably we still know as much as we do about metaphysical poetry (English poetry of the 17th century that featured extended metaphors called “metaphysical conceits”) and still study it because the extensive and controlled (tidy) poetic structure of these works was the perfect food for the specific metabolism of New Criticism.

One of the most canonized works of Western lit is the metaphysical poem “The Flea” by John Donne. In this poem, the (male) speaker tries to persuade his (female) lover to have sex. Both have just been bitten by a flea, and the speaker’s persuasion is based in a comparison of the lovers’ blood, mixed within the body of the flea, to intercourse. The comparison is held up as a characteristic achievement of metaphysical poetry and praised for cleverness. But there are other ways to look at this poem—other things to note about it. Here’s Mallory’s take:

This conversation is funny, but for me (battle-scarred, weary English major who, as a young pup, was forced to seek nourishment from the dry teat of New Criticism) it also represents a great paradigm shift. It’s so delightful to take a break from admiring the length of a poetic comparison, or the lasting potence of a literary work, or the singular genius of a creator, and look at a poem also as human interaction: between character and character, writer and reader, context and context.

Speaking of the singular genius of a creator, some of my favorite conversations in Texts from Jane Eyre feature poets and artists being incredibly trying to their loved ones due to their extreme self-involvement. Some are narcissists and some are just so lost in their unique world views that they’ve turned feral. Mallory’s William Blake falls in the latter category: 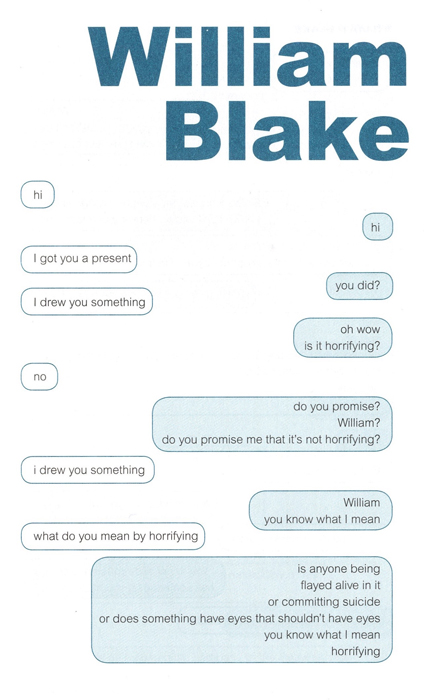 Here Mallory gives her imagination free rein, but in other conversations featuring the self-involved genius, she bases her satire on historical fact. Henry David Thoreau was, among other things, the author of Walden, a work of creative nonfiction about two years he spent living in a cabin in the woods in pursuit of “simple,” “deliberate living” and “self-sufficiency.” As you know, IRL you can only live for two years in a cabin if you’ve saved up a bunch of money from your tech job or you’re being subsidized. There were no tech jobs for Thoreau back in 1852, but there were other forms of privilege:

Lol! What really happened was: Thoreau got his friend Emerson, who owned a plot of land, to let him live on it in a work-exchange situation. But what is true and useful in Mallory’s representation of Thoreau is his failure to acknowledge, in the writing he became so famous for, the many privileges that allowed him to live as he chose. Not everyone can afford to live “deliberately,” a moral descriptor applied to socioeconomic status. (This is very American of Thoreau; in this country, the good have always been the wealthy.)

Texts from Jane Eyre gives us permission to read canonized texts not only as structures divorced from context and content, but as relational and subject to moral evaluations—and this permission is timely. We always need multiple ways to read. But right now, we especially need encouragement to read in ways that allow for interrelationships and moral evaluation. We need ways to read that shine the light on what used to be overlooked and outright concealed. In the past month, the nation has been presented with a number of powerful stories: the transition of Caitlyn Jenner, the race fraud of Rachel Dolezal, the image of an armed white cop sitting on a African-American girl wearing a swimsuit, the racially motivated massacre of members of the Emanuel African Methodist Episcopal Church. How these stories are told to us, and how we then retell those stories, will make all the difference in whether we move forward from this time with greater reverence for life, or less.

Life requires us to live in context and make moral choices. Let’s do the same thing in our reading, as a way to practice for life. In his book, The Storytelling Animal: How Stories Make Us Human, author Jonathan Gottschall explores the assertion that stories originally were a way to practice and study for life, in the same way that a flight simulation program prepares a pilot to fly. He writes, “Through stories we learn about human culture and psychology, without the potentially staggering costs of having to gain this experience firsthand…. Fiction [storytelling] is a powerful and ancient virtual reality technology that simulates the big dilemmas of human life.” The stories of the canon can serve just as well, if we just let them.

Mallory’s re-writings of canonical texts have the power to restore canonical works to us with a new framework for relating to them, all the while modeling a way to read that is both very old and somehow new and necessary. You can find much more of Mallory’s re-presentation of Western art and writing at The Toast, the website she co-founded with Nicole Cliff.