On the Grossness of Being a Girl: The CW’s “Crazy Ex-Girlfriend” 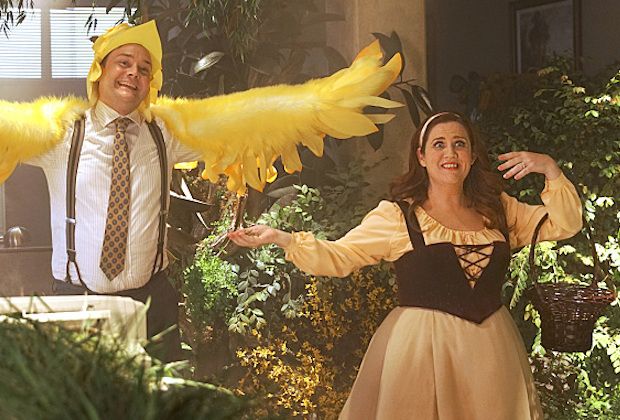 “Maybe this dream won’t poop on my face,” sings Paula from Crazy Ex-Girlfriend.  It’s the second episode of Crazy Ex-Girlfriend’s improbable second season. Dressed up like a Disney heroine, Paula sings “I pee just a li-ttle!” in a high, trilling voice, the humor coming from the mismatch between her sweet persona and her crass words.

This kind of comedy—the contrast between a sweet-as-pie Disney princess and the gross subject of her song—has been done before. A list from off the top of my head includes everything from Nine to Five to Shrek to Crazy Ex-Girlfriend’s creator, Rachel Bloom, who first gained my attention with her “If Disney Cartoons Were Historically Accurate” parody. But despite the fact that it’s been done before, Crazy Ex-Girlfriend always feels a bit different.

There’s tons of things that make Crazy Ex-Girlfriend something that works, something that—in the midst of all the tropes and clichés it gleefully parodies, subverts, and embraces—feel somehow new. I could have written about several aspects of Crazy Ex-Girlfriend – an awesome, how-did-this-shit-make-it-to-network? TV show that features a series of song parodies through the perspective of its heroine, Rebecca Bunch—but the one I kept coming back to and settled on was this: Crazy Ex-Girlfriend has a lot of fun with the grossness of being a girl.

In the climax of “Maybe This Dream,” Paula hopes that her new dream won’t be like “when I go running, so I have to take a dump…plus I also have my period so I have menstrual cramps plus dump cramps…”

I’ve had menstrual cramps plus dump cramps, but I’ve never had the experience immortalized in song. In fact, I’m not sure I’ve ever talked with anyone frankly, in person, about the uniquely horrible experience of all the dumps induced by your period in one big bloody mess.

The closest I’ve come is a thread on the feminist website Jezebel, when a thread talked about “breaking the poop ice with a new paramour.” Jezebel, not so coincidentally, was one of the first site to champion Rachel Bloom’s videos and recently prompted a thread asking readers to talk about the grossest times they peed or pooed themselves.

This all shows the importance of places where women can talk openly—and also make funny videos about—bodily functions. For too long, fart jokes, semen-as-hair-gel, etc., have been seen as the provenance of male comedians. Males were the gross, fart-y ones, while women were the delicate influences who blanched at that sort of thing.

This has always been in direct contrast to my experience. In every comedy, I always identified fiercely with the gross guy character. I was Steve in Coupling as he raged against cushions or argued for sacred toilet time and the importance of bare bottoms. Once, on a sort-of date, I thought I might fart, so I stood up to go the bathroom (to fart in private), and then farted as I stood up. The guy and I stared at each other, post-fart. We said nothing. As a girl, there’s no place where you joke about these things, no place to turn your terrible gas issues into an empowering laugh.

Crazy Ex-Girlfriend is all about mining those moments for a laugh. The very first episode features the “Sexy Getting Ready Song” features a contrast between the sexy “presentation” of getting yourself ready for a man and the realities behind it: the blood, the plucking, the pore strips, the wax, the unglamorous dance to get into Spanx – not to mention to the way men feel no pressure to engage in the same activities and are horrified at the reality behind the presentation.

And here’s something that I’m pretty sure is totally new: my favorite song from Crazy Ex-Girlfriend involves Rebecca’s sometimes-love-interest Greg singing with smugness about how “I Gave You a UTI.”

I am very, very prone to UTIs (urinary tract infections). This is a normal thing.  But because it’s a thing that has to do with women and specifically with sex and also butt germs, it’s cloaked in silence and shame. Perhaps if we as a society talked about UTIs more often I would have felt less lost and confused upon contracting my first one. I had no idea what was happening, and was thoroughly I was convinced I was dying or had syphilis or was dying from syphilis.

And I’m also very familiar with the slightly triumphant, “YOU HAVE A UTI? THIS IS MY DOING! HA HA! AWESOME!” attitude from dudes—one that I had never seen played out in film until “Crazy Ex-Girlfriend”’s little ditty. (Incidentally, I’ve never shared a heartier mutual laugh with my boyfriend than watching this song together).

Crazy Ex-Girlfriend works for many reasons. But one of them is that it celebrates all the gross, crass, uncomfortable, fart-y, maybe-I-need-antibiotics? aspects of being a lady.

The show is also deviously clever about the gap between the gross realities of being a lady and the desperate attempts to live up to an idealized male gaze. The most recent episode featured Rebecca imagining herself through the gaze of a 90s sort-of-punk male group in “Ping Pong Girl.” Crazy Ex-Girlfriend deftly nails both female realities and a desperate striving to be the male fantasy that “beats out flight attendant.” Similarly, in “Sex with a Stranger” the show cleverly interweaves the desire to be anonymously sexy and the concern for safety women in particular often experience: “I hope you’re not a murderer,” Rebecca Bunch sings, in a sultry whisper, and, “Have you been tested for STDs?”

Being a girl can be gross and scary. It can also feel invisible. Being “gross” as a girl almost always requires embracing invisibility. Acknowledging the parts of yourself that are “gross” or “too fat” or “crazy” used to mean rendering yourself invisible as a sex object or a participant in desire. “Crazy Ex-Girlfriend” rewrites the narrative: you can be crazy and gross—have period cramps and dump cramps and poor boundaries and have a shrieking voice in your head screaming “lose some weight, you stupid bitch!”—and still be a girl in love, hoping for sex and love and more—even if UTIs are involved.

Contributor Laura C. J. Owen is a writer of fiction, nonfiction, plays, and screenplays. Learn more about her at her website, www.lauracjowen.com.

← The Girl-Sized World of Bizaardvark
A Few Fave Female Cartoonists, Comics, and Illustrators →