Kate McKinnon is the Future of Comedy 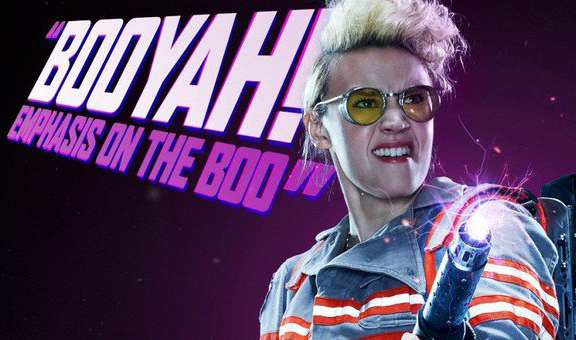 I’ve been looking forward to the new Ghostbusters since the all-female cast was announced. My great hope was that this movie would live up to the fears of its enemies and undermine the misogyny that exploded all over comments sections at the mere prospect of featuring female protagonists in an action/comedy. And while I really enjoyed this film and recommend that you see it, the end result is more of a compromise than the big “fuck you” I was hoping for.

By far, the greatest thing about Ghostbusters is Kate McKinnon. She is a revelation, a bright and shining star, a fiery phoenix rising from the ash of mediocrity. She is a gasoline fire, a nuclear bomb, a supernova. While the other actors move through a fairly straightforward script, developing believable characters with backstories and emotions, she is a wild and vivid series of voices, costumes, one-liners, gadgets, dance moves, hair styles, and facial expressions that in no way cohere except in their incoherence and, as such, add up to so much more.

McKinnon’s character, Holtzmann, is a “mad” scientist, but her madness actually seems to be a deeply sane lack of self doubt. Unlike Kristin Wiig’s Erin, she has no need for external approval, the recognition of institutions or peers. She is excited by science, discovery, and innovation, and she is loyal to those worth loving. She jokes, she dances, she sings, she creates. She invents, improves, and experiments, without self-doubt, self-consciousness, or self-loathing. Her creations bring her joy, and she is a joy to watch.

The reason Kate McKinnon stands out is the same reason the film falls short: unlike McKinnon, Ghostbusters doesn’t go all in. It hints at diversity, intersectionality, and female empowerment, but just as quickly washes over its most interesting ideas and messages with a bucket of slime, a sappy moment in female friendship, or a boring cameo. It gives us moments of eighties nostalgia and pumps great songs that only play halfway through before transitioning into a musical dumpster fire like Fall Out Boy’s craptacular new theme song (so bad that even Missy Elliot can’t save it).

The film shows us female characters struggling to gain respect in a male-dominated world, but falls short of holding that world accountable. Instead of being lauded for her tenure-track STEM job at Columbia, Wiig/Erin is made pathetic by her attempts to fit in (or lean in, or level up). In order to become a fully realized adult woman, she must learn that striving for approval is a betrayal of self.

Ghostbusters hints at diverse sexuality, but doesn’t give us much more than Wiig/Erin’s hubba-hubba drooling over Kevin, the ditziest secretary alive. By casting Liam (Thor) Hemsworth as Kevin, the film almost offers a counterpoint to traditional male/female roles, but then ends up recapitulating stereotypes about physical beauty and stupidity. For those of us looking, there are quiet hints about McKinnon/Holtzmann’s sexuality, including a perfect one-liner compliment: “I’d pick you up at an AA meeting.” Really though, all of these characters are fairly asexual – a big shift considering how sexually charged the first two movies were. At best, we can imagine and infer that Holztmann and Abby’s (Melissa McCarthy) “friendship” is something more.

Studio-driven choices to normalize and homogenize are what people complained about when the trailer first showed Leslie Jones as an MTA officer rather than a scientist. I imagine a room full of suits sitting around saying, “yes, yes, she’s so believably urban.” Leslie Jones is a comic force, and her character, Patty, is far more dynamic than the trailer would have you believe. Director Paul Feig defended his choice in making her the only non-scientist of the crew by insisting the part was originally written for Melissa McCarthy, but that Jones is such a talent that he wanted to give her a place to shine. She does shine, but in light of the racist twittering of the last few days, it seems callous to ignore the fact that casting the black woman as the “street-smart” MTA worker is anything short of problematic. Jones brings energy and intelligence to the role and she is not so much street savvy as she is a walking encyclopedia of building-by-building New York City history. She plays the character a bit subdued, holding back from some of the more brash and animated moves she makes on SNL. One wonders how she might have played it if the character was a professor of history or another scientist. If Leslie Jones had “let loose” with the same kind of exuberant self-assuredness that McKinnon brings to the screen, she would have been the heart of this film.

That’s not to say that only Kate McKinnon gets it right. Each of these actors has strong moments, and the movie as a whole comes through with a few interesting themes. The villain, Rowan, is an IRL version of every internet creep and “nice guy” who thinks himself wronged by the world – a dorky, basement-dwelling white dude who didn’t end up on top and blames the social structure for his inability to fit in. Instead of writing mean comments though, Rowan brings ghosts back to wreak havoc on a city that’s ignored him, regardless of consequence for anyone but himself. He’s a perfect foil – threatening but beatable, dangerous but also inherently ridiculous. He takes up the right amount of space in a female-driven narrative (not much) and we can walk away feeling good about our characters and ourselves.

Are movies with female-dominated casts required to be feminist tomes? No, but this one in particular would have benefited from a more assertive take on gender, sexuality, race, and society. McKinnon is hilarious in the moment as she delivers funny lines or looks, but she also brings a longer-lasting joy – a sense of freedom from expectation and prescribed roles. Her kinetic humor shows us what it looks like when we aren’t limited by bodies or defined by expectation. She is beyond that, floating high above, a comedian of such skill that she teaches the rest of us that there are new ways to be.

If there’s anything to take away from the runaway success of Kate McKinnon’s big screen debut, it’s: Don’t hold back. There is room for more: more women, more character, more everything. Bring on the inscrutable, indomitable, unstoppable female leads. Show me things I haven’t seen, that I didn’t yet know I needed. Get weird with it. Please.

Contributor Mika Taylor loves funny shit, but writes sad and sometimes absurd stories, mostly about women and children, parenting and loss, and sometimes mental illness, so two hours in a theater watching kick-ass women kick ass was pretty much the best assignment ever. Her stories and essays have appeared in or are forthcoming from Granta, Ninth Letter, The Kenyon Review, Diagram, and others.