The Purity of Punk vs. the Production Values of Pop: A Fan of “The Maria Bamford Show” Reviews “Lady Dynamite” 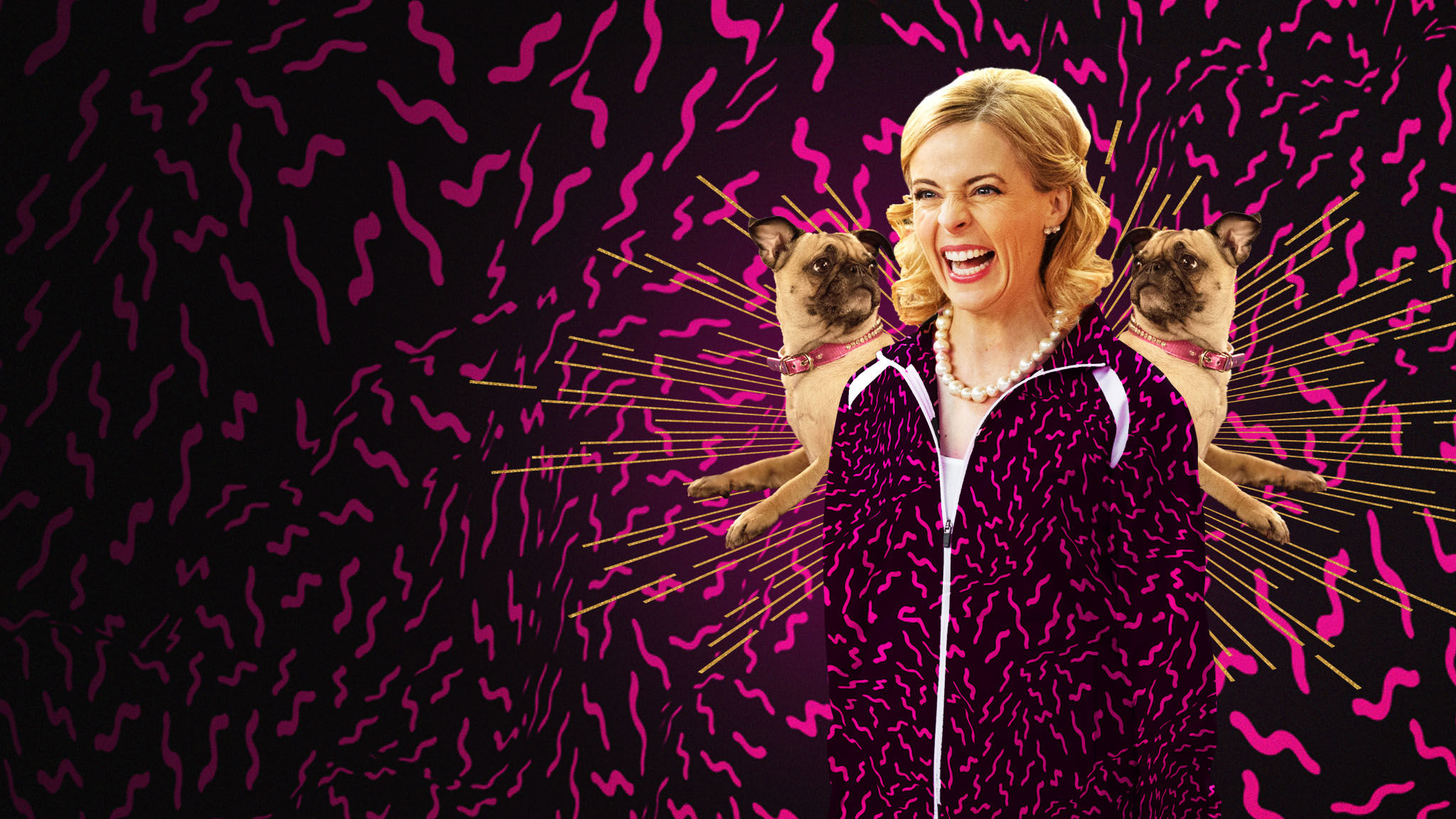 Once upon a time (2007), comedian Maria Bamford made a low-budget web series called “The Maria Bamford Show.” In each five-minute webisode she played all the parts: herself, her mother, her father, her sister, her hometown nemesis. The only other actor in the show was Maria’s pug Blossom, who played herself.

I can’t overstate the brilliance of “The Maria Bamford Show.” For starters, to say that Maria Bamford is “good with voices” or “adept at impressions” is like saying that Picasso was pretty good with shapes. She has an uncanny, witch-like ability to adopt distinct inflections, conjuring whole characters out of thin air, and the show felt richly peopled, despite featuring only her.

Maria Bamford is also known for de-stigmatizing mental illness. She talks openly, strangely, and hilariously about her struggles with OCD, depression, and bipolar disorder, and she touts the benefits of medication and therapy in candid, comforting fashion.

One of my favorite parts of “The Maria Bamford Show” is the song “Don’t Be Afraid of the Dark,” which serves as a kind of capstone to the project.  In it, Maria cheerfully sings about accepting your dark thoughts and mental illnesses while showcasing her large range of characters. It’s both hilarious and full of good advice (“Just stay on your meds!” she sings brightly). I just watched it again for the millionth time and, as always, it filled me with warmth. Watching it on repeat has gotten me through some perilous moments in my own mental-health history. (I find singing “I’m staying on my meds and drinking plenty of diet coke” is soothing in times of high anxiety).

So: Maria Bamford and her comedy mean a great deal to me, probably more than any other working comedian. You can imagine my excitement when I saw she was getting her own Netflix show, Lady Dynamite. I hoped this would be the big-budget version of “The Maria Bamford Show” I’d always wanted.

I watched the first episode with my boyfriend. We sat in silence. He got up and started to do the dishes. I looked over at him, my distress clearly evident on my face.

I resolved to watch the entire 12-episode season, because as we all know shows can take awhile to find their voice, and I was hopeful.

This I can say: it does get better. The first episodes are definitely the weakest, and as the season goes on, I started laughing way more and sitting in stony, disappointed silence way less.  Certain threads of the show get developed in a satisfying manner, and by the last episode I had a grin on my face as the credits rolled.

Still, there were too many moments when I reflected that the half-hour format felt too long, or when I scrolled through unwatched episodes with an internal sigh, feeling a sense of obligation to finish rather than the delightful pull of the binge-watch.

In a way, I know this is probably a result of my own inflated expectations and the love of Maria Bamford I bring to the show. For starters, no one plays Maria Bamford’s characters like Maria Bamford. Having other actors play her mother, father, friends, and manager feels odd and disappointing. Lady Dynamite is full of talented comedic actors, but I couldn’t avoid a palpable sense of how wasteful it was to have Maria Bamford playing only Maria Bamford.

One of the best episodes is the fourth episode, “Jack and Diane” in which Maria meets a man who falls in love with her “Diane” voice, a rich, plummy voice she adopts to sound impressive. The dull-but-attractive Jack (played hilariously by Brandon Routh) is really only into “Diane” and loses interest the second Maria speaks like Maria. This is a simple, effective comic conceit that lets Maria Bamford stretch her voice-acting muscles.

The trouble is that Lady Dynamite rarely seems to feel content to hang an episode, or even a scene, around one central comic premise. It’s as if the show is so worried about losing your interest that it’s always throwing multiple story lines, jokes, celebrity cameos, and random images at you, like a nervous host cracking joke after joke in an attempt to get you to stay at a party.

It doesn’t help that Lady Dynamite chooses to comment on this insecurity pretty openly; the first few episodes are weighted down with meta-commentary about the show itself.

For instance: the first episode. There’s an entertaining but confusing opening, in which it’s unclear if we are seeing Maria’s breakdown within the show or a different breakdown of the real Maria. (The show hinges around a central nervous breakdown that sent Maria to live with her parents in Duluth for awhile—what plot the twelve episode arc has is a build-up to finally getting to see what that breakdown was about—so the choice to open with another, never-explained nervous breakdown, that then references the show itself by having Maria jump into a Lady Dynamite van, is confusing, to put it mildly).

After the disjointed opener, the show finally seems to be hitting a rhythm. Maria puts a park bench in her neighborhood to create community, and is dinged by a bicycle cop, played by comedian Patton Oswalt. She shyly asks him to come see a stand-up show, and we finally seem to be getting somewhere.

Then, Patton Oswalt breaks character and begins speaking as himself, comedian Patton Oswalt. “Maria, you’re not going to do stand-up in the show?” he asks. “That’s been done!”

At this point, I think my boyfriend literally said something like “Oh come on!” out loud. I’m usually pretty open to meta-commentary, but so much meta in a row, before an actual show has been established, produces a mental effect not unlike motion sickness: there’s just too much veering around and no place to focus.

And the fact the show openly addresses these concerns doesn’t really help. “I think my show is finally finding its voice,” Maria says, at the end of the pilot. “I mean, it’s Patton Oswalt’s voice, but still…” By the third episode, actress Mira Sorvino, playing a British actress playing an American actress, bursts out, “Enough of this meta-bollocks!” But these sly winks don’t really help, because all they’re doing is pointing out real problems with the show. Joking that your show hasn’t found its voice doesn’t change the fact that the show doesn’t have a coherent voice. Having a character complain about all the meta doesn’t help if all the meta is getting tiresome.

The feel of the episodes gets more relaxed as the season goes on; there’s less anxious, apologetic fourth-wall breaking. An emotional arc emerges as Maria begins to cautiously develop a romantic relationship with a guy named Scott and navigate the terrain that comes with that (“I have to stress pee!” she chirps anxiously, when it is proposed that the relationship might be getting serious). Great running jokes develop, such as the heavily German-accented voice of her pug, Bert, as well as the complex and involved lives her dogs seem to have without her: “I’m watching the game with Scott and we’ve also gotten into craft beer!” Bert informs her, nonchalantly.

But it was difficult for me to get past what I felt was a central narrative misstep, which was to divide the chronology of the show up. Thus, the show takes place in the present in LA, and also Maria’s past in LA before her mental breakdown, and also Maria’s past after her mental breakdown, home in Duluth, Minnesota. The show spends the first few episodes doing a lot of determined, aggressive lamp-shading of this narrative choice, having Maria defend the viewing public as being able to follow a complicated narrative, and then carefully explaining the transitions between past and present.

I don’t think it works. It shows a lack of confidence, as if we wouldn’t be interested if the story were presented more straightforwardly, but must instead be tantalized by the chopped-up, fragmented narrative. It ruins the pacing of each episode: As soon as we get interested in the plot of the present, we’re dragged back to the past, and vice versa. The emotional heft of the darker Minnesota flashbacks is undercut by being juxtaposed with the brighter “present day” plots and vice versa. A voiceover attempts to make thematic connections between the two plots, but often the connection feels thin.

In some ways, “The Maria Bamford Show” worked because it was so simple: Maria played some characters, including herself, and told a story about her mental illness. I feel like Lady Dynamite contains a better, more straightforward show: one that has the confidence to tell a simpler story of breakdown, return home to Minnesota, and then a return to LA, interspersed with some of Maria Bamford’s sharp, zany observational humor. But by anxiously trying to do more than that, listening to the voices that cry, “It’s been done!”, Lady Dynamite feels as if it loses some crucial heart. The simple magic of Maria Bamford’s voices and honest observations is replaced by explosions, green screens, and elaborate “random” humor: Maria is randomly replaced by a lamb! Maria-as-power-ranger battles a sugar-monster! Some of it’s genuinely funny, but none of it has the emotional impact of even one Maria Bamford stand-up special.

Lady Dynamite doesn’t suck. But I didn’t love it. Which, given the depth of my love for Maria Bamford, says it all.

Find Lady Dynamite on Netflix and “The Maria Bamford Show” on YouTube.

← No To Femism!
“The Flarp Comes to Fort Chiswell Virginia”: Short Story →