Right now, the filming of Absolutely Fabulous: The Movie is taking place for a 2016 release. (!!!) What that means, sweetie darling, is that this is a good time to talk about Ab Fab, one of the great achievements of comedy by women, created by British comedians Jennifer Saunders and Dawn French. 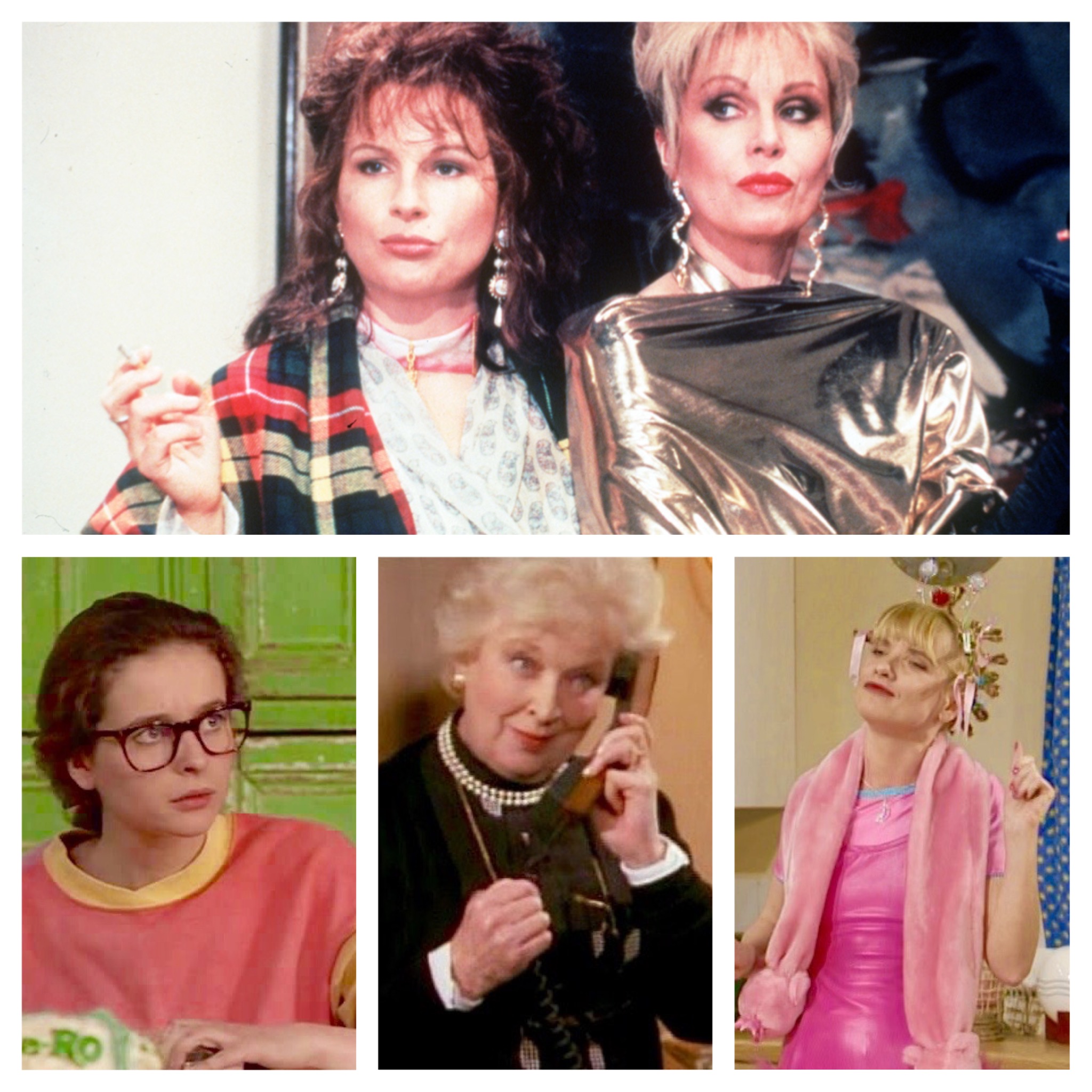 I was a huge fan of the original BBC series (1992-1995) and the 1996 follow-up special, The Last Shout. To my horror/delight (horror, because how did it escape my notice? delight, because now I have new Ab Fab to watch!), I’ve just discovered that since the nineties, the show has returned many times. Here I’ll just talk about what I know: Ab Fab at the beginning.

Ab Fab is a show about a reluctant community of women whose differences in lifestyle, values, and age create a motherlode of comedy. The main character is Eddie, a PR agent in her forties who is predestined to fail in her desperate search for meaning based the most cruelly fleeting of measures: youth and cool. Eddie’s best friend Patsy is an aging beauty who lives in a perpetual alcoholic present. Saffy, Eddie’s serious teenage daughter, rejects everything that Eddie and Patsy stand for (excess, cool, materialism, and fame) in favor of academic success and responsibility. Eddie’s elderly mother is exhibiting the first signs of dementia, and Bubble, Eddie’s assistant, is an airhead who is always dressed (regardless of the hour) to attend a rave.

To an American viewer (this one at least), the pitch-blackness of the show’s satire is what makes it magisterial. It’s almost unrelentingly cruel in its worldview. For example, Patsy is Eddie’s “best friend,” but there are plenty of times when she demonstrates that she doesn’t love Eddie at all, but just needs her, the way a parasite needs a host. Saffy, who otherwise might stand a chance in this world, is so codependently enmeshed with her mother that she will never be happy, no matter how well she does at university. Eddie’s mother maintains a sweet and cheerful demeanor, but she’s steadily losing her grasp on reality, and she knows it. Her daily visits are a kind of haunting, reminding the other characters that no matter how hard they strive, they’re going to end up like Mother: a “useless old woman,” with no more chances left to prove her value, and alone in more ways than one. Airhead Bubble shows us what a manic pixie dream girl might look like when not in the service of the development of a male character: borderline unemployable, quirky to the point of mental illness, handicapped by her ADD.

In the entire first run of the show, there is exactly one feel-good moment. Saffy has gotten herself involved with an older man, her lecturer at university, and has just discovered that he’s married. Her heart is broken–and Eddie punches him in the nose! It’s a glorious moment that redeems them all. But in the next episode, everyone goes back to their normal fallen selves, with Patsy robbing Eddie blind in order to keep her (Patsy’s) adored older sister afloat.

The necessity and artistry of the show’s bleak vision was underscored when America made a rip-off sitcom: Cybill (1995-1998) starring Cybill Shepherd as a twice-divorced single mother of two and struggling actress in her forties and Christine Baranski as Cybill’s hard-drinking friend Maryann. By comparison to Ab Fab, it was awful.

The optimistic form of the American sitcom can’t adequately depict the difficulty of being a woman. For that, you need dark-as-a-moonless-night British comedy. I’m looking forward to catching up on almost two decades of Ab Fab, and I hope it has stayed as fabulously bleak as ever.

← Misandry for LOLs and Intrapersonal Alchemy
No To Femism! →