Misandry for LOLs and Intrapersonal Alchemy

One of my favoritest funniest things I’ve read on the internet in recent memory was this tweet from Shaadi Devereaux, a Black and AfroIndigenous writer who uses media to build narratives for Trans Women of Color: 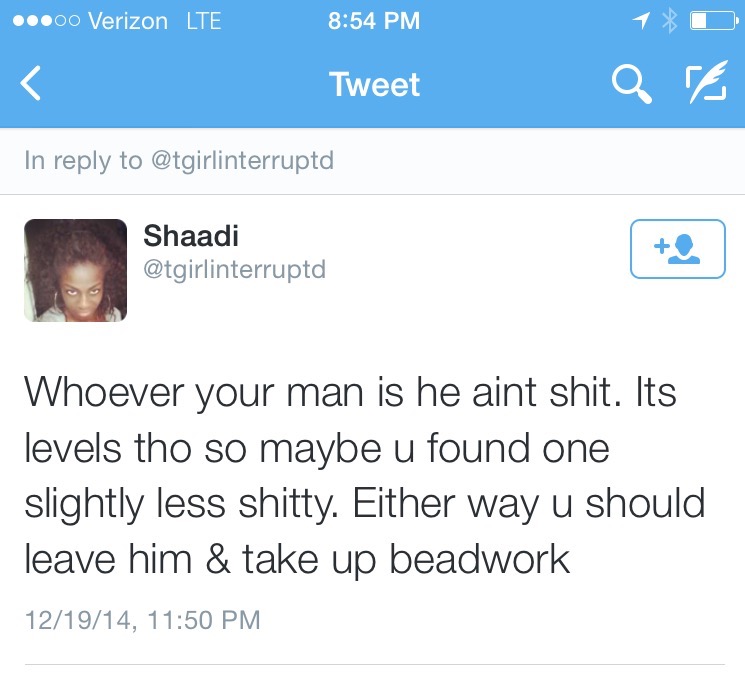 When this tweet popped up on my timeline, I was in the right frame of mind to receive its wisdom. A few months earlier, I had ended another relationship malformed by male entitlement and my overtolerance of that entitlement. In a short, sharp bite, Shaadi’s tweet expressed what I’d been feeling: that pursuing a relationship with a man was a very serious, tragic waste of my time. This tweet both made me lol hard and reminded me of my resolve to reduce the amount of my time, space, and energy that I’m willing to give to a man.

Misandry is a now-not-new trend in comedy. In fall 2014, it was well observed in articles by Amanda Hess for Slate and Jess Zimmerman for Archipelago, among others. Both discussed popular misandrist mottoes as ironic performance. Jess Zimmerman very helpfully boiled it down: “NO, NONE OF US LITERALLY WANT TO KILL ALL MEN. Here’s what we do want to kill: the concept of masculinity.” Just a few months ago, The Medium published a more measured article about misandrist humor by Charlotte Shane, in which she points out the important failures of popular misandry memes, including cissexism, gender essentialism, and racism.

Misandry is mean because it dismisses an entire sex. It’s ridiculous (ironic) in that many (perhaps most) of the practitioners of misandry don’t actually dismiss all men. But despite that, misandry can be useful. Life-saving, actually. To illustrate why, I need to share another tweet from Shaadi, a laser blast of 100% truth:

Certainly from the outside, misandry looks like a big, crude weapon that destroys everything in its path totally and immediately. But for women, our reflex to prioritize male happiness over our own is such a solid, monumental construct that misandry’s bludgeon only knocks out a few of the supports. You have to start somewhere.

Shaadi’s tweet lived in my head for months. Then one day, I decided that wasn’t enough. I wanted the tweet rendered in a tactile way. It would have been best to spell it out with beads, but I don’t know how to do beads. My handcraft of choice has always been needlework, so I ended up embroidering the tweet in black silk floss on the very fragile and thin cotton of an antique nightgown I bought at an estate sale for a few bucks. 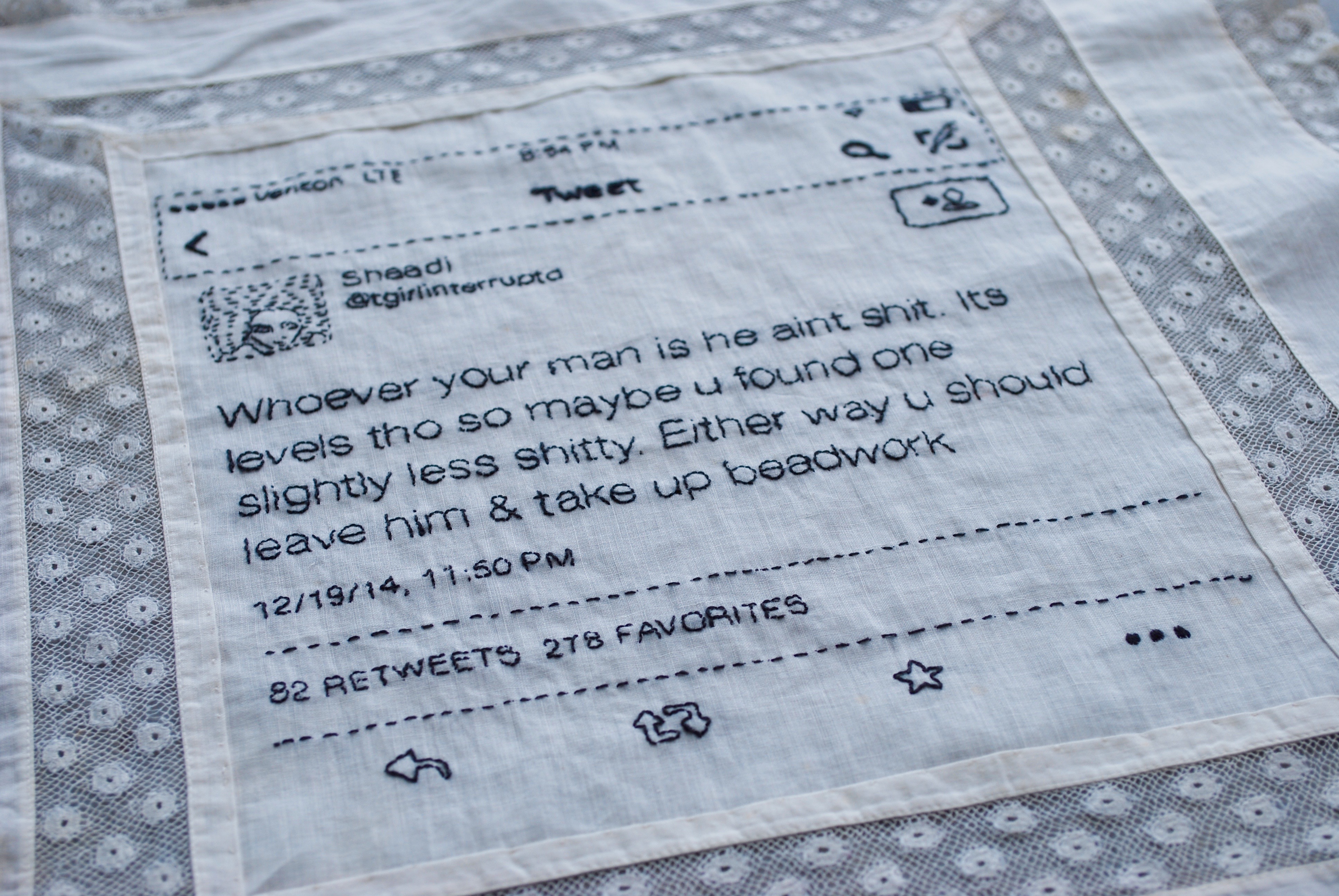 As a finishing touch, I framed the embroidery with the nightgown’s original lace border. It feels nice to “have” the tweet as physical object in addition to its existence as shimmering pixels on my phone and a life-saving motto burned into my memory. 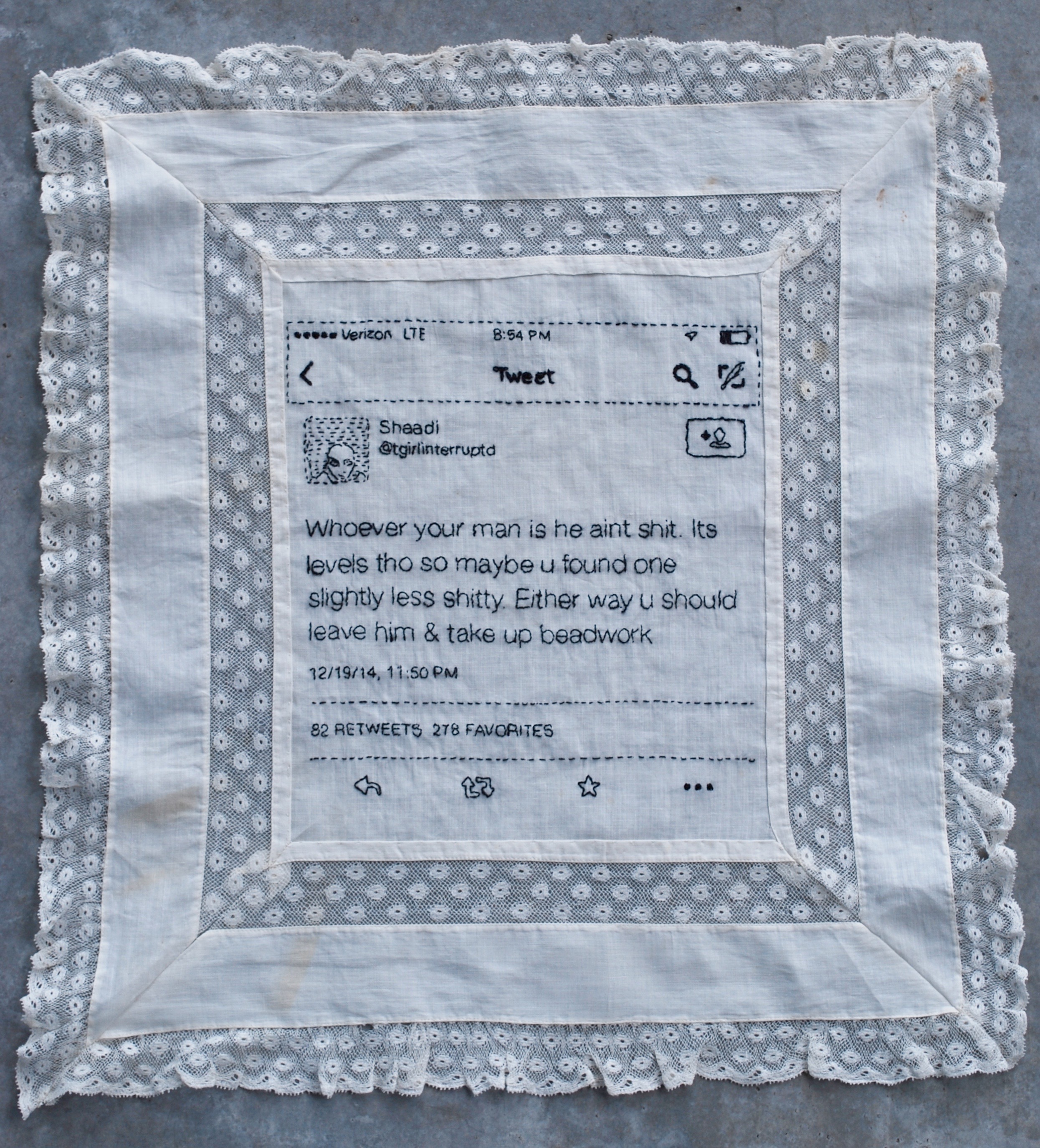 Let’s leave the last word to the brilliant Shaadi Devereaux! She followed up her original tweet with this great addition: 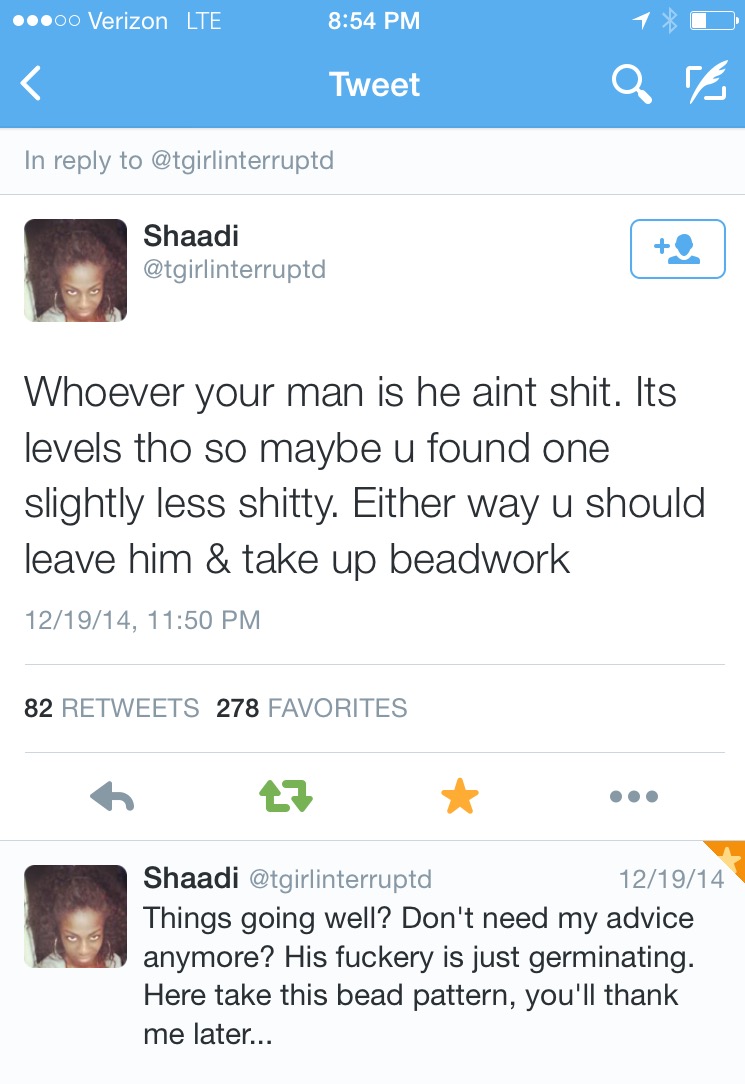